Ooh la la! The cinematic French are up next in our Who’s Who green spotlight, with their very advanced ‘Ecoprod’ initiative. This project has been working to green the industry since 2009. In order to become the established leader within sustainability and media that it is today, Ecoprod has come a long way since its inception. The Ecoprod Approach? Develop and appropriate a sustainable shift (without compromising artistic and production value) alongside the industry professionals. Bon travail! 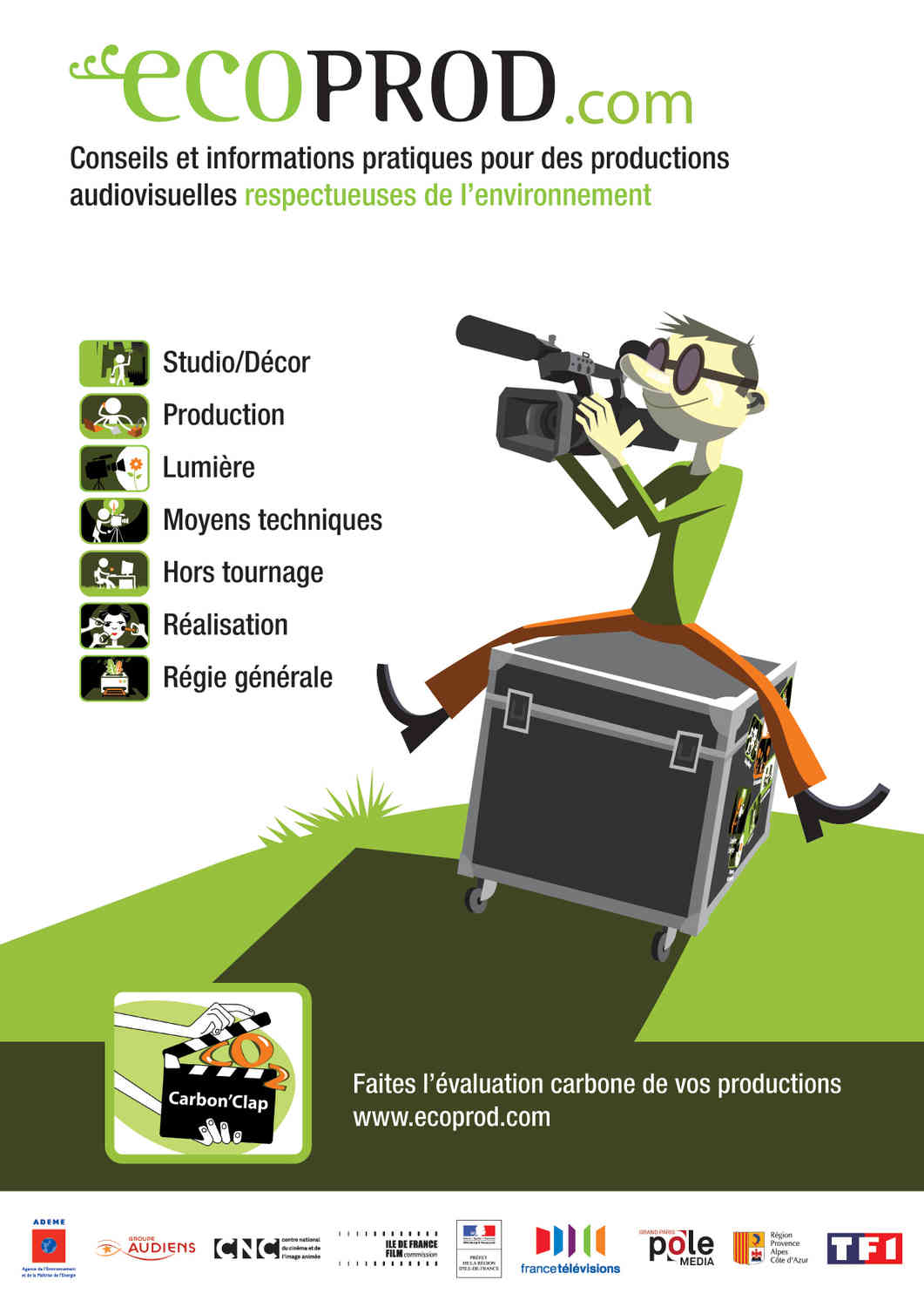 In 2009, the initiative was created by six different sector bodies (ADEME, AUDIENS, Film Commission Ile de France, DIRRECTE IDF, France Télévisions and TF1), who all shared a vision to better consider the environment within the realm of media and broadcasting.

Since then, Ecoprod has become an established leader as well as symbol of possibility within sustainability and media practises. In providing French industry professionals with the tools and resources necessary to reduce the ecological footprint of their activity (practical sheets, testimonies, followed by case-studies of productions), Ecoprod has been able to develop and appropriate a sustainable shift alongside the industry professionals.

It is no wonder then that in 2010, Ecoprod developed Carbon’Clap: the first ever computer-based carbon calculator specifically formatted to cater to the audiovisual production industries. This free software allows users to understand the main resource intensive issue for a specific project, and then facilitates a process of continuous mitigation throughout the production.

In 2011 Ecoprod worked to expand its influence and accessibility, by examining the effectivity of its available tools. At this time, three new actors joined the Ecoprod network: the Region Provence-Alpes-Côte d’Azur, Le Pôle Media Grand Paris, as well as the CNC, National Cinema Centre. Effectively unifying all of the diverse partners which make up Ecoprod, are the same guiding principles for their action: long-term efforts, implementation of initiatives that are free-of-charge for users, collaboration among shareholders, and implementation of recommendations made by the partner organizations. An extensive list of the Ecoprod partners includes public and private broadcasters ( producing the supporting structures), government experts, and the industry’s pension bodies. The initiative is open to any new stakeholder, and all who are willing to adopt the working methods of the collegiate group which is governed by a partnership agreement.

The next notable step for Ecoprod took place in 2012, with the impressive launch of their published ‘Ecoprod Production Guide’; presented in conjunction with the Cannes Film Festival. This guide acts as a practical tool, providing professionals with the understanding and methods necessary to generate a more sustainable practise. Examples in the guide include: ready-made posters to draw attention to and facilitate on-set recycling, downloadable excel spreadsheets to document the use of energy and resources on-set as well as the accumulated savings, etc.

A partnership with Eco-Act in 2012 further legitimized the possibilities and accuracy behind carbon offsetting for productions, and encouraged producers to compensate for their emissions on a voluntary basis. Working with Eco-Act allows Ecoprod partners to support projects such as rainforest regeneration, and alternative strategies for energy consumption.

In 2013, the Action Group ( consisting of representation for all official participating bodies), became more specifically invested in mitigating waste management within the film production sector, and has published a comprehensive study on their findings.

To date, Ecoprod’s achievements as an on-line resource center include: development of the first ever industry based carbon calculator (Carbon’Clap), comprehensive examples and case studies of green film making within France, interviews with sustainably minded professionals on their projects, as well as the publication of relevant fact sheets, studies and key figures (the latter bridging sustainable development with the knowledge of over 320 industry professionals in order to collect information, generate meaningful numbers, and validate research proposals…wow!) Currently, there are more than 600 concerned professionals who have self-registered on Ecoprod’s website, expressing a high degree of interest in the project.

Ecoprod’s work also considers the communication taking place at the industry’s main events, and aims to make more sustainable the film festivals, industry conferences, and round table meetings. An example of this is their presence and contribution as a partner with the Cannes Film Festival, as well as the Deauville Green Awards.

Bravo Ecoprod, in facilitating a French industry shift to more responsible and sustainable practices, while setting a great example for international industries as well! We look so forward to seeing how you will be going green next…to keep up-to-date with all of their latest news, like Ecoprod on Facebook here.