As founder and president of New York City’s ambitious Film Biz Recycling project, Eva Radke can be proud of the contributions that she and the initiative have made towards a greening of the film industry. Since 2008, Film Biz Recycling  has been able to work with more than 600 productions in order to divert about 800,000 lbs. (or about 400 tonnes!), of would-be-waste from the NYC disposal system. This speaks volumes to the positive impacts that the 5 year old Film Biz Recycling project continues to have. Eva’s work embodies a strong commitment not only to the environmental agenda, but it is also highly concerned with very practical social-humanitarian causes. 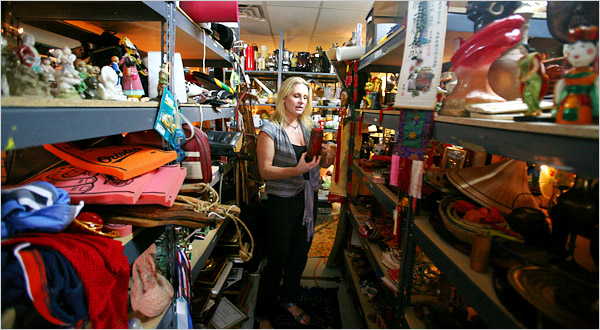 A not-for-profit organization, Film Biz Recycling is able to prevent pollution of the environment and generation of waste, by offering services which re-purpose set materials through local charitable donations, or through operation of their retail store. The project simultaneously creates jobs and strengthens related communities through this retail location, which also operates as a prop shop (where productions can rent costumes and set pieces) as well as “creative reuse center”.

Having begun in 2008, Film Biz Recycling now accepts donations from New York based film, tv, commercial, and theatrical productions. Instead of tossing leftover production goods into disposal bins, Film Biz Recycling sorts through donated props, wardrobe, and set materials in order to redistribute 60% of these donations through a network of charitable and non-profit partners within NYC. The other 40% of donations are catalogued and stored at the Film Biz Recycling’s Brooklyn location where they will either be put on sale for public purchase at 50% their original retail value, or be offered as novelty rental items for film and theatre sets.

The zero-waste platform of Film Biz Recycling works to see that no donated materials go to waste: things which cannot be repurposed are responsibly recycled, and food scraps are redistributed as compost to urban farms within NYC. As a “creative reuse center” Film Biz Recycling is able to offer community upcycling workshops as well as children’s art classes, with the materials which have been donated. The space also facilitates educational opportunities in regards to sustainable production practices. It does this through an offering of consultation, and green seminars aimed at the creative and entertainment industries. One example of this is Film Biz Recycling’s first annual  “Golden Dumpster Awards” which took place at the beginning of May this year. With the support of PGA Green, this event was hosted in an effort to recognize current green initiatives within the entertainment industry, while promoting growth, and knowledge exchange opportunities for this community’s network.

As a member of The Reuse Alliance, and the NYC Materials Exchange Development Program, it is clear that Film Biz Recycling founder Eva Radke aims to share her knowledge and expertise across a diverse array of environmental platforms.