On Thursday, Nov. 27th we hosted the 2nd annual ‘Green Screen Day’, for the International Documentary Film Festival Amsterdam, at the Brakke Grond in the city center. For the event, we presented special screenings for the top three documentaries – as selected by our team- from the festival’s ‘Green Screen’ program, & each provided an in-depth exploration on a different aspect of sustainability. The on-site experts & filmmakers who introduced the films, & who also held open Q&A sessions with audiences, contributed to make the screenings even more stimulating & inspiring. Because two of the three films screened sold out of tickets & also made it onto the IDFA’s Top 10 list of Audience Favourites, we can truly say that the day was a most engaging & green success! See photos of the day’s events right here .Continue to see the recap film of IDFA. [photos:Michael Vervuurt]

In addition to the central theme of ‘sustainability’, all three films told the stories of protagonists to whom ‘courage’ was a main feature of their character. In Good Things Await (Phie Ambo) protagonist Niels Stockholm exhibits his imovable courage in pursuing his own biodynamic approach to farming, in the face of encroaching opposition – a contention that could end up costing him his operational certifications. In Virunga (Orlando von Einsiedel), the rangers of Virunga National Park show an incredible example of bravery in remaining committed to the protection of the park’s natural habitat, as well as it’s endangered mountain gorillas; this is despite the looming civil war, and prospect of park occupation by violent rebel forces. In The Salt of the Earth (Wim Wenders, Juliano Ribeiro Salgado), renowned Magnum photographer Sebastião Salgado, finds the courage to continue shooting after 40 years of documenting war, violence, and refugees, in order to capture and then share all of the natural beauty that our majestic planet has to offer. Audience appreciation for these bold protagonists, has been made loud and clear, as two of these films have landed a spot in the top 10 list of IDFA’s Audience Favourites: Virunga (4th place), and The Salt of the Earth (7th place). 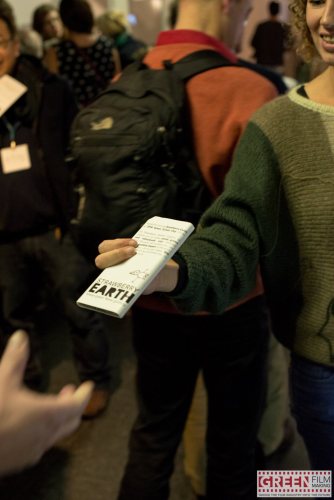 The Chocolate Makers (or De Chocolatmakers in Dutch), gave specially wrapped Fair Trade chocolate bars to our ‘Green Screen Day’ audiences. The chocolate was made of cocoa from Virunga National Park. Very cool, and very delicious.

Chef Jonathan Karpathios (restaurant Vork en Mes) was our presented guest for the Q & A after Good Things Await, and he expressed great support for Niels Stockholm’s depicted philosophy in ‘respecting nature’. Karpathios explained that he only buys produce for his restaurant, from farmers who labour out of love for their land and livestock. Though Stockholm’s approach shares it’s ideals with Karpathios’ restaurant, Jonathan explained that the regulations of the industry at large are not always so ideal: “Formarly I was unable to serve my own grown vegetables to guests. There is no clear approval authority for this kind of produce”. Jonathon then gave the audience a quick visual tour of his idealistic Vork en Mes kitchen, and even provided them with a tasting snack of  handmade ravioli with some of his home grown beets.  In closing, Karpathios left us with this thought, “Mother Nature is my business partner” – nicely emphasizing the film’s explored philosophy, that keeping her healthy and happy, is essential for good business. 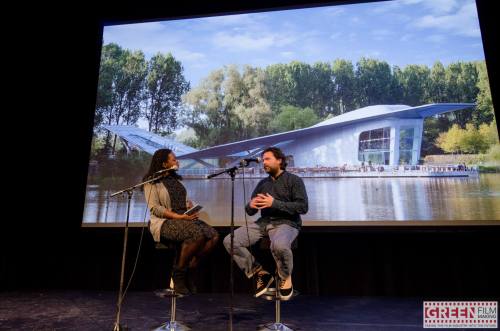 Event host Simone Weimans in conversation with special guest and chef, Jonathan Karpathios. His restaurant ‘Vork en Mes’ is seen in the background.

This documentary shows how the conservation rangers of Virunga National Park in the Congo (on UNESCO’s World Heritage List), currently face many compromising threats from: extensive drilling plans by encroaching oil company SOCO, illegal wildlife poachers, and violent M23 rebels who want to take ownership of the park under their control. Director Orlando von Einsiedel, and producer Joanna Natasegara were on hand for the screening and a related talkback. They expressed the nerve-wracking conditions of filming, along with the immovable bravery of the park’s rangers in facing their threats and attacks: “Their strength and courage inspired us to continue filming, even though sometimes we were terribly frightened. During filming, we were sometimes literally in the middle of the violence.” Despite the thematic heaviness of the film’s content, the filmmakers wanted to make a film with a hopeful, optimistic, and impactful message. Natasegara asserts that “This story had to be told. SOCO [the encroaching oil company] should be stopped because they are disrupting the area”. She also explained that the film has been screened in a dozen government settings, in an attempt to educate governments, and engage politicians; so that they may act on the current state of affairs that compromise the integrity of Virunga Nature Reserve. Virunga tells the story of those who bravely work to respect the Earth and all that lives, even when in the face of great adversity. 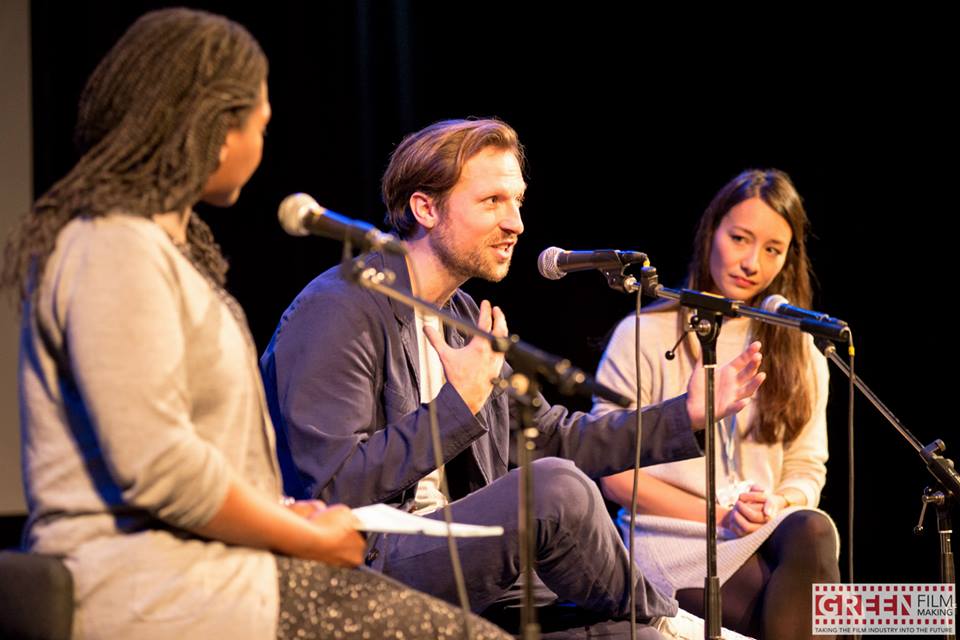 Director Orlando von Einsiedel and producer Joanna Natasegara, discuss the state of filming on the production of ‘Virunga’.

The Salt of the Earth

This latest film by Wim Wenders and Juliano Ribeiro Salgado, follows the development of war photographer Sebastião Salgado. After dedicating 40 years to portraying the victims of war and famine in his work, Salgado shifts to focus on capturing the majestic beauty of our natural world. These new inspirations allow Salgado to tell the story of our planet through his images, and they develop into his latest photo project ‘Genesis’. Philosopher Paul van Tongeren (winner of the Socrates Cup), was present for the special presentation, and prior to film, he posed a number of reflective questions for the audience to keep in mind during the screening: How did the alternation between Salgado’s still photographs, and the film’s moving images interact to tell a story? What story? After the film, Van Tongeren wondered how it was that the still images were more powerful modes of expression than the film itself, and he asked: Do the still images show hope for a better world, or is that’s the imposed positive expression by the filmmakers? The religious themes and references within the film were also discussed, and someone from the audience posed the thought that the film might be some visual form of a modern hagiography that over idealizes Sebastião Salgado’s life and work. These stimulating thoughts and open questions speak to the engaging nature of the films content, and hopefully they helped to enrich the audiences viewing of ‘The Salt of The Earth’ as well.

Philosopher and author Paul van Tongeren discusses a few of the main themes in ‘The Salt of the Earth’, and also poses some thoughtful open questions to the audience.

The Power of Greening the Screen with IDFA

It was an incredibly successful Green Screen Day for the Green Film Making Project. We can say this not only in terms of the day’s visitor numbers, but also in terms of the clearly significant impact that the day had with audiences. Though our project aims to foster awareness of efficient and environmentally friendly production processes, the power of documentary filmmakers and their narrative content, is just as relevant ( if not more so…) in contributing to a better-vision-future of the world in which we all live.

Thank you to all of the filmmakers, guest speakers, participants, and audience members who helped to make ‘Green Screen Day’ 2014 such an engaging and enlightening success. That’s one small step for sustainable filmmaking, one big leap for a more sustainable planet!

If you enjoyed this article, you will also like the following from our blog: UN Climmate Summit in NYC: Big moves for Greenthinking, Action, and Business, and Short Film Series: Nature is Speaking… are you listening?