Looking back at the workshop ‘Sustainability on location’ (22nd of May)

What do you get if you stick sustainable entrepreneurs with their products, location managers and film producers together in one room? Good ideas about how you can collaborate to make the filmmaking process on location more sustainable! Exactly what Els Rientjes had envisioned when she organised a workshop on Friday the 22nd of May with ‘sustainability on location’ as it’s central theme. This workshop was a continuation of the previous event ‘Sustainable production in practice’ that had taken place on the 19th of March. 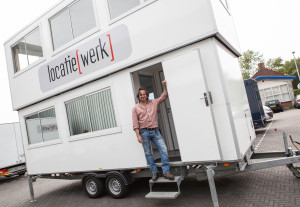 Place of action: the premises of ‘Locatiewerk’ owned by Tijn Heerkens, who was also present as a speaker on the 19th of March. For a while now Tijn has had several energy saving products on offer, such as the location van/trailer ‘Skyliner’ and the ‘WC-flex’. Both products are easy to relocate, energy efficient and have low water usage, which make them smart and efficient alternatives for the more traditional location facility vehicles and the classic Dixi porta-potty.

The invited producers Ron Groenewoud (Ron Groenewoud Film), Daniel Aiss (ALP) and Niek Teunissen (Umami Media) inspected and assessed the product range of ‘Locatiewerk’ and besides this, Els had invited several other entrepreneurs to pitch their innovative equipment to the film industry. 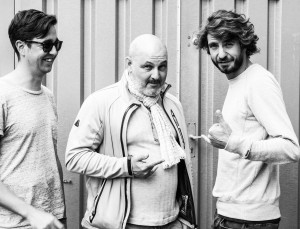 ‘I am definitely planning to start using what I have seen today’, said Ron Goenewoud at the end of the day. What did he see? The GreenBattery for example. This mobile battery is a smart replacement for the engine-generator and is already being used at music festivals. Daniel Aiss and Niek Teunissen are also enthusiastic and would like to take part in a test case with the GreenBattery.

How can a product like this be profitable on a filmset? Groenewoud sums up the disadvantages of a generator: the costs of a GreenBattery are reasonable, ‘a generator will cost you about 135 euros a day, this one would only cost about 85 a day’, you don’t have any exhaust gas, you don’t have to refuel with Diesel, it’s much more environmentally friendly and it’s very silent when in use. Aiss adds: ‘And especially this last point can save a lot of time, because how often do you have to shut down the whole set when waiting for stuff to recharge?’. Niek Teunissen is also positive: ‘The mobile battery of GreenBattery is a simple application that can be used in a smart way. I would like to start using it in the fall, when we shoot ‘Kappen’ by Carry Slee. I don’t bring a generator usually, but if I could connect this to a house grid, I would be able to compensate for the differential tariff.’ 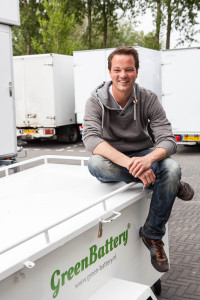 Test cases with the GreenBattery

Han Huiskamp of GreenBattery is happy with the enthusiastic reactions and feedback. ‘The most attractive advantages of the GreenBattery are that it is so silent and that it can protect the power demand of a residential circuit whilst still making high power supply possible. This means less hindrance for the location that is hosting the filming, no blown fuses and you only need one cable.’ Huiskamp hopes that this will lead to a first test run in the coming weeks or months. Daniel Aiss is motivated: ‘I have a pending funding application for a short film, so if this is granted, I will definitely be in touch.’ And Ron Groenewoud is shooting Eddy Terstal’s Alberta (FuWorks) in the fall. ‘Part of the shoot will take place in a forest, so in this case the GreenBattery is definitely an interesting option.’

Spectral Utilities (a Metabolic venture) also visited with the Solar Transformer. Ward Hupperets, Chief Technology Officer, talked about this mobile battery that is basically a trailer with solar panels. Because of the energy-saving qualities and it’s ease of use (assembly time: 2 minutes) this could be a very clever application for film sets. Biggest advantage: You only need (free) sunlight, nothing more. Without sunlight, the Solar Transformer supplies power for 5 hours. 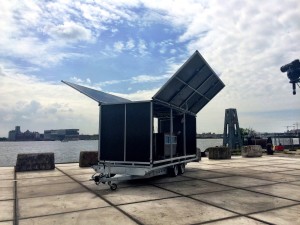 Click to read more info on the Solar Transfomer (PDF) 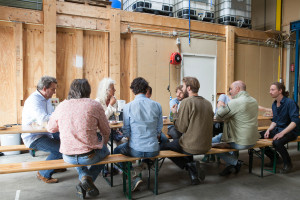 All producers called it an inspiring afternoon. Well, let’s have Niek Teunissen expand a bit: ‘Because for me it was already clear that something should be done with sustainability in the film sector. I think it is a given, it is just part of the times we live in.’ But Teunissen, a sucker for gadgets according to himself, is impressed with what he has seen. He also mentions an intrinsic advantage of working sustainable in the film industry: ‘It can really bother people if we are shooting with a diesel-generator. The noise, the smell. For example in a heavily filmed city like Amsterdam, it is important that we as a sector are keeping the goodwill for the filming process.’

Location manager Willem Doorman also visited, with an electric cart for on set. Watch the interview with him in the video report by Jaap & Kasper Filmproductions:

Recap workshop May 22nd: Sustainability on Location from greenfilmmaking on Vimeo.

As previously mentioned, Els Rientjes wants to start doing several tests this summer, during which for example the GreenBattery’s energy use will be measured to make it clear what it’s advantages are more concretely. The people of Watt Now will be coordinating these tests.

And Tijn Heerkens sees possibilities to work out a plan together with Spectral Utilities to combine the GreenBattery with the Solar Transformer. As soon as we have an update available on their progress we will of course share them on our website and social media. And through are newsletter. You are not getting it yet? Sign up here!