Thekla Reuten is known to most as an internationally acclaimed actress from films such as ‘Dinner’, and ‘The American’. But, in addition to a rich body of on-screen work, she is also proud ambassador of the Green Film Making Project. In this role, Thekla has been actively participating with filmmakers in the search for a green filmmaking industry identity, since the start of our project in 2012. As a judge for this year’s Green Film Making Competition geared towards European students, Thekla’s work in developing opportunities within sustainable production has been emphasized in the promise of future industry professionals: “It’s nice to see that green filmmaking has truly landed within the film industry”. 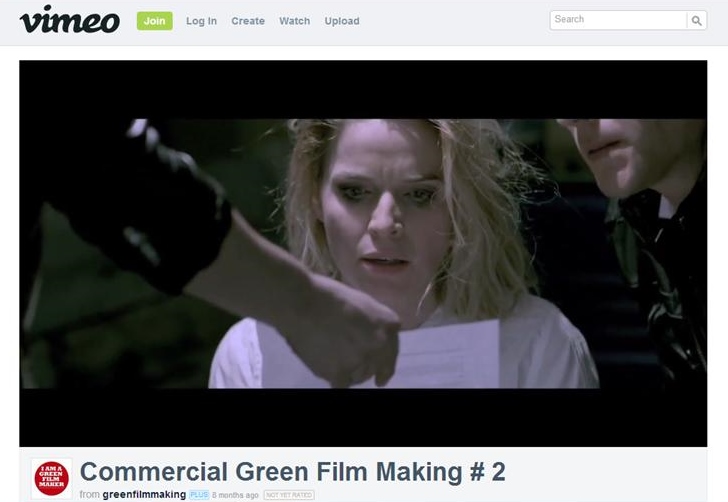 Living the green conscious life:  at home & at work

Thekla’s intentions as an actress reach far beyond the screen, as she is adamant that sustainability plays an important role in her life and world views: “I have always thought about my role in the bigger picture, in the wellbeing of the earth and all that lives- about the story behind products we buy. So, when I got the chance to act as an ambassador for the Green Film Making Project, I knew that this role would suit me very well”.

Thekla describes herself as an ambassador of sustainability, for the production pioneers who first explored, experienced, and wrestled with green filmmaking opportunities. “I totally understood the initial and inherent contradictions that the participants of the first Green Film Making Competition found in 2012. Sometimes it is difficult to open yourself up to a different and new way of working.” But, these initial challenges have now paved the way to a more open-minded industry, she observes: “We can see this through the international film scene, and how green filmmaking has become a more integral part of the industry worldwide. For example, the film industry based in Hollywood has expressed a great commitment to sustainable production through the money, effort, and energy it has put into the greening of popular blockbusters – such as The Amazing Spider-Man 2“. 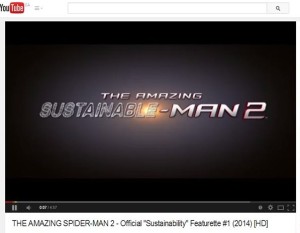 When asked to reflect on her role as formal ambassador for the Green Film Making Project, it is clear that Thekla is a most engaged and effective representative: “At the start of my formal ambassadorship, I worked on the film ‘Hotel Lux’ in Germany. I had just met with sustainable production expert Juhi Shareef (Senior Sustainability Consultant at Eco-Age, UK) for the first time, and I was full of information about green filmmaking. I walked around the set with my new ‘I am a Green Filmmaker’ reusable Dopper bottle, and I was able to spark conversations on the theme of sustainability with my fellow cast and crew. One of them was Michael Bully Herbig, a very influential German filmmaker. Later, he would go on to both produce and direct the film ‘Buddy’ for which he hired on-set Sustainability Manager, Nicola Knoch. It is great to see that from these little sparks, more people in Europe are catching on to make the film industry a greener one”.

While recently shooting a film in St. Petersburg, Thekla learned that simply asking for a change on-set, can go a long way in her role as an actress: “I asked an employee of the base camp in St. Petersburg if he could help to manage the heating in my trailer – so that the heat was not on all the time, especially when I was not there. I asked if he could manage the heat so that it was only turned on, half an hour prior to my arrival. At first he was surprised, and then he began to understand the reason for my request. It was a small act, but it said a lot. This simple example goes to show you how ingrained the dominant practices of film sets can be; when it comes to energy use for example. Instead, in this case, the man came to a new thought: there is another way of doing this, a more efficient way”. 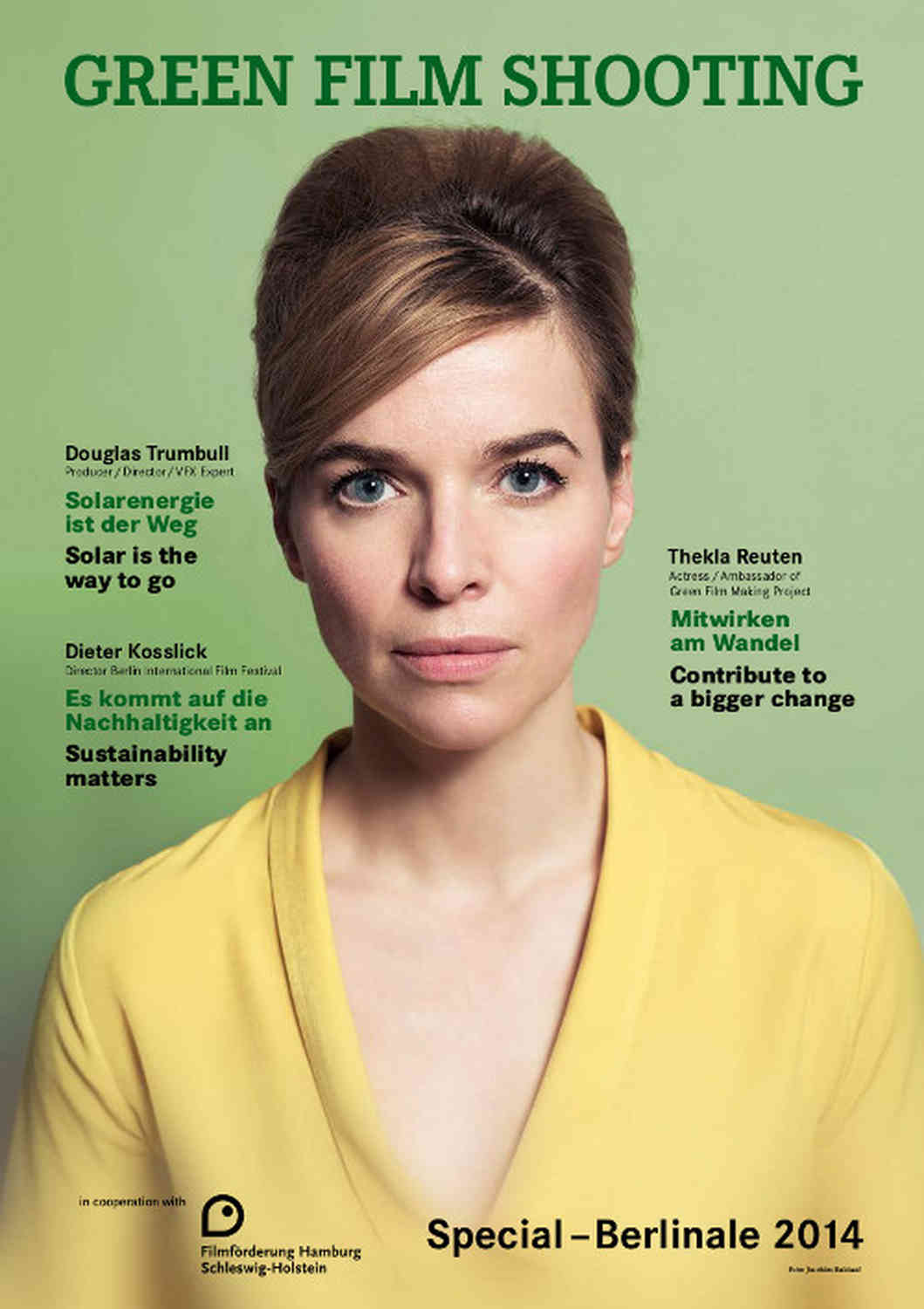 Thekla’s effective role in such green filmmaking successes is two-fold: “In my role as an ambassador, I am able to provide visibility to the Green Film Making Project. As an actress, I always try to think about the many and diverse ways that I can contribute to the more sustainable production of a film.”

How does Thekla inspire green filmmaking when on-set?

According to Thekla, there are a number of ways she approaches this: “I always start by asking the production not to print out my call sheets. Also, I make it clear that I am willing to carpool along with other people. This saves me my own ride and vehicle. When I’m shooting in Amsterdam, I always travel to set by bike. It also helps if you’re flexible when sharing your green filmmaking ideas. For example: instead of suggesting that the caterer stop serving meat everyday of shooting, suggest that the caterer stop serving meat every other day, in favour of a vegetarian option”.

So, why green filmmaking?

“The beauty of the film industry is that it actually encompasses every aspect of our daily lives,” says Thekla, “from transport to food, makeup, clothes, light, technology and energy. These things make the film set an ideal place to look for paths of change, and to experiment. Another nice thing about filmmaking is that the story always defines the rest of the processes, and because of this, you are able to experiment in a variety of different scenarios too. The film industry is very visible as well so, green filmmaking is an incredibly effective way of putting the importance of sustainability on the map“.

What does the future of green filmmaking look like?

When asked about her vision for the future of green filmmaking, Thekla explains: “I hope that soon there will be an on-set eco-consultant in the Netherlands. Our experiences with the Green Film Making Project have shown us that for filmmakers, on-set roles are already very demanding, and so it is difficult for them to maintain an additional attention for sustainability. So, a professional in the field of on-set eco-management is very welcome. Another major ambition: linking film industry fundings to the green filmmaking approach. This is the best way to bind producers to more sustainable practises. I think a kind of green certificate, visible to the public, can also have a positive effect. A film that was produced sustainably, transmits positivity to it’s audiences”.

She continues to add that, “There’s more room for improvement. In the making of, for example, greener television. It is important to follow developments in the world of television too. Is ‘green’ a topic for broadcasters right now?”

In a final thought, Thekla affirms: “Above all, I hope that we become more aware of the impacts that our choices have, and that people make more conscious decisions because of it. It’s no longer a question of whether to choose sustainability, but rather how to approach it”. We couldn’t agree more.

[this article was translated from it’s original Dutch version here]

If you enjoyed this article, you will also like the following from our blog: The Amazing (sustainable) Spider-Man 2: “With great power, comes great responsibility” and Online:‘How to Green Your Film Production (so far)’ Guide