Green Film Making Competition for European Students: Winners are In!

Drrrrrrum roll please: the winning teams of the 2014 Green Film Making Competition for European Students have been announced! Green Film making Project Ambassador and actress Thekla Reuten was present at The Netherlands Film Festival‘s masterclass ‘Green Filmmaking: The Future of Producing’ last week, to make the big announcement. The initial task of the competition was for students to come up with innovative and sustainable solutions for existing film production practices such as: lighting, art direction, transportation, energy consumption, craft services, etc. Without further ado, the winners are: 1st the Students of Filmbase in Ireland with their production ‘Poison Pen‘, 2nd  the Students of the University of Arts in The NL, and 3rd the Students of The Grand Independent in England. Congratulations to all!

What was it that made this Irish team come out on top, and earn the title of ‘Green Filmmakers of the Year’? Find out, in this video right here. And here is a video they made in response to being announced the Grand Prize winners.

Here are a few thoughts from the Irish students, on the green filmmaking process:

“We really enjoyed the challenge of working on a green film.” – Lorna Fitzsimons, Director

“It was definitely a positive overall. I think everyone enjoyed it, I don’t think it was a hindrance to anyone on set . I was probably more beneficial than anything.” – Sharon Cronin, Producer

“I think a lot of things from the first day took a little while to get rolling, but I think as the production wore on, people became far more conscious of it.” – Oliver Nolan, PR

“I ended up doing my thesis on green filmmaking, its a very important area.” – Jonathan Victory, Sound Designer

John Gormley, the film’s Green Production Manager, also outlines much of the student’s green filmmaking processes here: “[they] embraced the concept of green filmmaking, and that meant looking at all aspects of filmmaking. From costumes -which were in most cases, all recycled- we looked at the energy provider, and we tried to use green electricity as much as possible. The scripts, which in fact were provided on iPads -we tried to avoid paper-, we recycled as much as we could on set, and that was successful for the most part. We also had green transport, we had electric cars provided. Every aspect of this film we looked at, and in that way, we reduced our carbon footprint [ …] Overall the experience of green filmmaking has been very positive […] we learned some very valuable lessons, we got great assistance from some of the state agencies, and I think on the basis of what we learnt, there’s a great future for green filmmaking here in Ireland.” 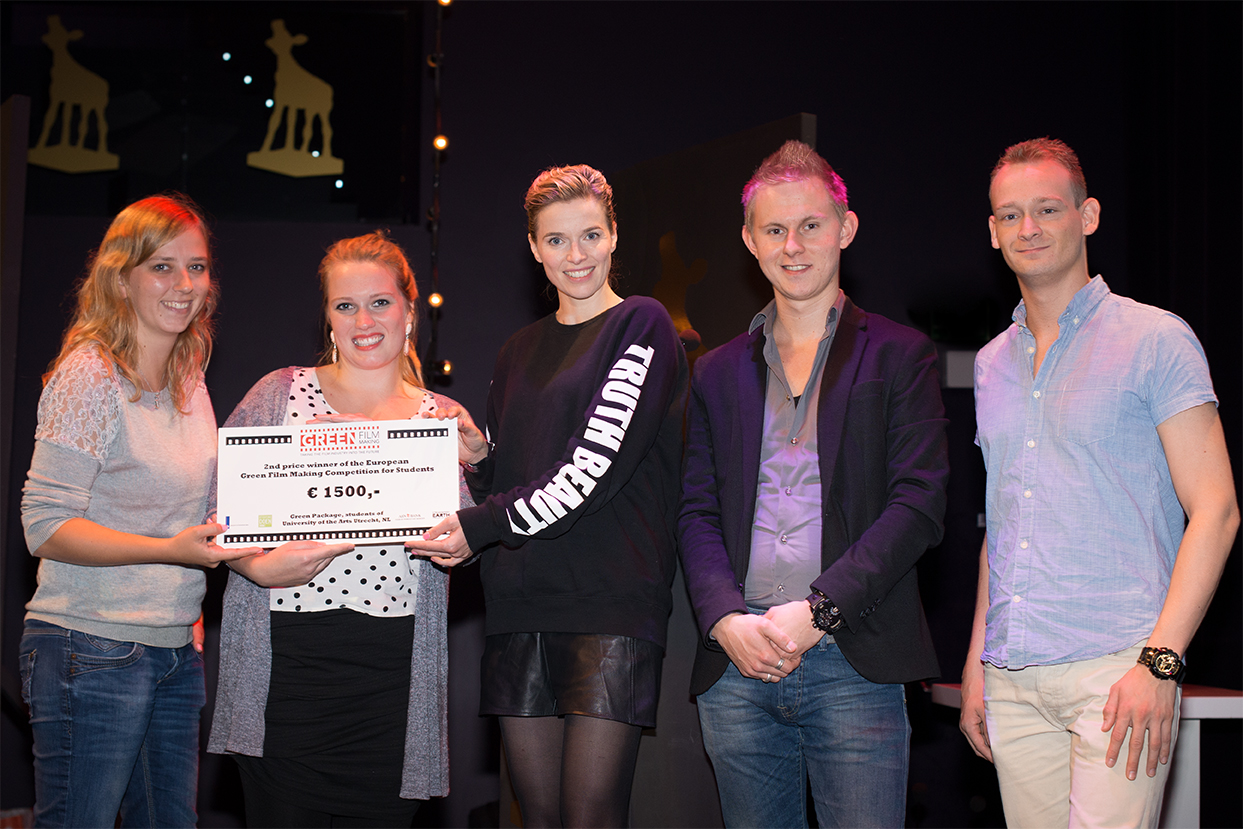 “The most important thing I picked up during the competition is that it is relatively easy to make your film more sustainable.” – Rikke


Check some of their production’s green processes, in this short video here.

“What our future plans are, is just basically to continue that kind of mind set, the fact that it is very achievable. And to continue to think about sustainability and green filmmaking in all of our future film projects.” – Chris

Here is a video they made in response to winning the 3rd place title.

The Green Film Making Project congratulates all of the winning student teams!

About the Green Film Making Competition

The Green Film Making Competition is an initiative that challenges filmmakers to rethink their production processes. The previous two editions of the competition in 2012 and 2013, saw the participation of Dutch professional filmmakers.

In the third edition of the Green Film Making Competition 2014, we worked together with European students. With this student edition of our Green Film Making Competition, we encouraged young filmmakers across Europe to produce their films as sustainably as possible, while coming up with new and innovative sustainable solutions for on-set: lighting, art departments, transportation, energy consumption, craft services, and over all production process.

We believe that student innovation is an integral part of this important industry shift, and we believe that up-and-coming filmmakers are a prominent part of the sustainable film movement.

If you enjoyed this article, you will also like the following from our blog: Who’s Who – Thekla Reuten ( NL), and ‘Green Filmmaking has ‘landed’ across Europe